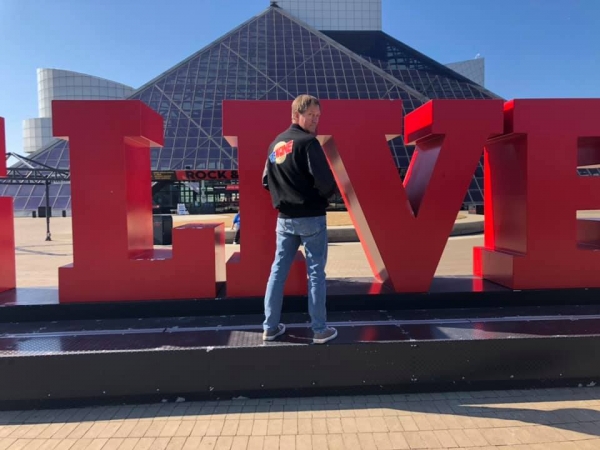 As a long-time member of the Rock & Roll Hall of Fame, I'm happy to report it is once again open for business so on a recent sunny day, Sue and I took a trip up to see what's new.

First of all, the Hall is following Covid-19 guidelines so it's best to buy your tickets in advance and choose what day you want to go. This way, they can keep the crowd size down. Bring a mask. They've got a nice selection of them at the gift shop.

Our first stop was to see the "Power of Rock Experience." The late film producer/director Jonathan Demme somehow neatly pared down over 30 years of induction highlights into a tight 12-minute film. It gets you pumped to embark into the hall's exhibits. We stopped by the exhibit of last year's inductees and down the hall to view all who have come before them.

The cities of rock exhibit spotlights the various towns from which certain sounds originated, (i.e. Memphis, Detroit, San Francisco, London, New York, Seattle). Then we strolled through the exhibit showing the controversial side of rock such as "The Beatles more popular than Jesus" statement, Elvis Presley's hip gyrations, and those lyrics that will send all who listen straight to the devil. It makes you realize Rock & Roll has always been controversial and as one inductee in Demme's film put it , "it's not a genre that can be contained. It's a spirit." And that spirit takes on many forms and speaks to people in differing ways. And if you'd like to express your opinion, you can use the power of your vote. Click through to the fan vote page and cast a daily ballot through April 30th before the Class of 2021 gets named.

Lastly in other Rock Hall news, it was just announced this year's induction ceremony will be held October 30th at the Rocket Mortgage Field House, a much larger venue than ever before which will allow a larger local audience to attend. In closing, remember how pumped we were when it was announced that Cleveland would be the site of the Rock & Roll Hall of Fame. Capture that feeling again and revisit it sometime with a new set of eyes.

More in this category: « Rundgren's Live Akron Album Memories of Michael Stanley from a Band Member »
back to top