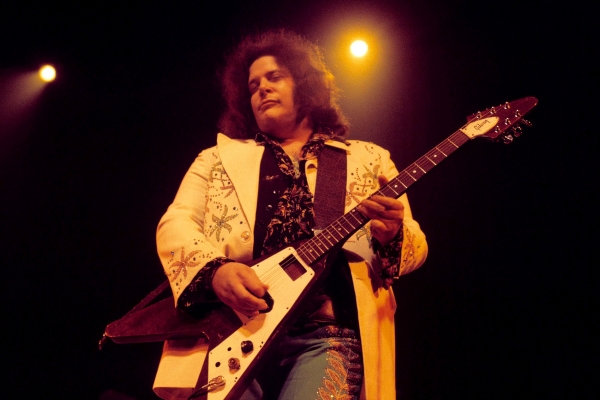 Guitarist Leslie West has died. The leader of the band Mountain, known for the hit "Mississippi Queen," had gone into cardiac arrest on Monday in Florida, and died of an apparent heart attack today. He was 75. Click to read the full story from Rolling Stone Magazine

Were you in downtown Akron when he played at Cascade Plaza for a 4th of July weekend celebration many years ago? I was and I had the humbling pleasure to bring him up on stage. Here's how it went down.

I was waiting backstage for my cue to go up and intro the band. What I didn't know was West was already on stage waiting for me! His walk onto the stage had gone unnoticed by most of the stage hands because he walked slowly, having had the lower part of his right leg amputated because of diabetes. Next thing I know, someone was yelling at me to get up there and do my job so I sprang into action. I offered a clumsy apology when I came face to face with an angry West who was certainly not there to wait on the local radio DJ to say, "Ladies & Gentlemen ~ Leslie West & Mountain."

He gave me some advice that I'll never forget and abide by to this day. He pointed to the center stage microphone and told me to use that one to make my announcements. Then he barked, "And don't touch the effing mic!" although he didn't say "effing." He was not as tall as me so when I approached the center stage mic, I had to squat down a little to bring him up, hands at my side because I was not about to adjust that "effing mic."

More in this category: « End of the "Road" for Sammy Hagar Happy Birthday, WONE! »
back to top